When Kate Wright moved across the country from Kingston to Vancouver as a teenager, she could have never anticipated the career in front of her. Today, she hangs up the stick and boots as a 15-year veteran of the team, a captain, and the all-time cap record holder with 228 international matches to her name.

Wright’s retirement comes off the back of a two-year absence from the game following the 2019 international season. The Women’s National Team lost their Olympic Qualifier in Dublin in the fall of 2019 and then the COVID-19 Pandemic put pause on international hockey in spring 2020.

Wright said the decision to retire was a combination of the pressure of a global pandemic as well as making the choice to become a parent. She said many factors weighed into her decision but ultimately, she feels happy and excited for her new chapter of life.

“COVID has affected us as a family, and I slowly realized it was going to be really hard to make it work. It was a hard reality because I dreamed of being a mom and still competing on the world stage,” Wright said. “But now, my priorities have shifted. It’s time to find new things outside of field hockey and watch my son grow and do every sport under the sun and focus on my family.”

According to Wright, her teammates, friends and family have been reaching out to her with messages of support. Wright has also had time to reflect on her career and appreciate her own legacy she has left for those who come next.

“I feel like I have helped create a legacy for the women’s national team and now it’s time to see what the younger generation can do,” she said. “I want to see the new person who becomes the most capped player. This team really deserves success. This team works so hard and puts everything they have into it, and I hope they achieve that success they deserve.”

Kate Wright debuted for the national team in 2008. She retires with 228 international matches to her name.
Photos/Yan Huckendubler

After quickly excelling in high school and provincial team field hockey, Wright moved to Vancouver from Kingston to pursue a spot on the national team. Wright played her first international match in 2008 on home soil against Chile. It was a moment she said she’ll never forget. For Wright, the opportunity to put the Canadian jersey on never got old and was something she cherished every single time she stepped on the field.

Wright shined on the international stage. She developed into a stalwart attacker who predicated her game on toughness and hard work. She was an expert ball carrier and a terrific playmaker. As she grew with the team, she was soon looked at as a leader on the field. Like those who came before her, Wright wanted to grow and create a high-performance environment for the team. That legacy is still alive and carried on by the current athletes.

“When I joined this team, I was so young. It was an eye-opening experience. I latched onto a few of the older players…I had that little sister feeling a bit,” she said. “That era of players showed me where my position was as a younger player. But it also showed me how I wanted to create a culture…a high performance and supportive environment.”

Wright highlights the 2015 Pan American Games in Toronto as an important milestone in her career and the development of the team. That bronze medal set up a successful next four years leading to the silver medal at Lima 2019. For her, these final few years of her career have been some of the most challenging but rewarding seasons of hockey of her career. 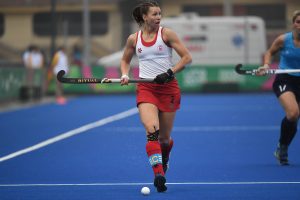 Despite challenges, Wright says she’s played the best hockey of her career over the past three years. Photos/Yan Huckendubler

Now, Wright lives in Victoria, BC with her husband, Phil and her son Charlie. She is thrilled to be a new mom and is relishing living with husband and close to friends and family.

“There’s a lot of chasing, playing, and running. We’ve been on the go,” she said. “I can’t even describe what being a parent means. The love you have for your child. I knew it was going to be hard to leave [field hockey], but transitioning to this new role as a mom, has filled that void.”

On top of being a new parent, Wright is working with the RBC Marketing and Citizenship team as a part of the RBC Olympians program, which offers athletes work experience and career support. The shift from off the field has been a challenge but she is tackling this new stage of her life head on.

“it’s a big step forward for me as a person and I’m trying to find a new identity that’s not always ‘Kate Wright the field hockey player,’” she said. “I was focused on field hockey for so, so long, that you forget that you do need to identify who you are without the sport. It’s really hard but I’m finding out that I’m good at other things.”

Congratulations to Kate Wright on an amazing career. A dedicated leader and a true legend of the sport.

Note: The above interview was conducted on November 5, prior to the postponement of the Junior Women’s World Cup.